The information below is taken from the , Chapter 3, Patrol Squadron Histories.     https://www.history.navy.mil/content/dam/nhhc/research/histories/naval-aviation/dictionary-of-american-naval-aviation-squadrons-volume-2/pdfs/chap3-1.pdf    This is the official history of the second VP2, a direct descendant of Bombing Squadron 130 (VB130) flying PV-1s.  A link to an abbreviated narrative format history is at the bottom of this page.

The first Navy aircraft squadron to carry the designation of Patrol Squadron TWO descended from Patrol Squadron TEN, established in 1924.   https://www.history.navy.mil/content/dam/nhhc/research/histories/naval-aviation/dictionary-of-american-naval-aviation-squadrons-volume-2/pdfs/chap4-5.pdf   I remember meeting a man at the 1986 reunion who had served in VP2 in the 1930's.  As of Jun 2004, we have one member who served in VP2 flying PM-2s in 1934-36 out of Coco Solo, Panama.  The history of the first VP2 is here.

A page dedicated to those known to have lost their lives while serving in  Patrol Squadron Two and its predecessors is here.  nvsoar  18Jun2004

VB-130 was established at , on , but it was not until after the squadron had been redesignated VPB-130 that any record of a squadron insignia was found. The first insignia, approved by CNO on , superimposed a clock face with a bomb for the hour hand and rocket for the minute hand set at , on a silhouette of a PV-1 Ventura aircraft with a starlit sky as background.  The design symbolized the round the clock bombing and rocket operations capability of the squadron’s first aircraft, the PV-1 Ventura.  The field was royal blue; stars, white; aircraft, light gray with black markings; clock, white; numerals, black; and clock hands, red.  VPB-130 was redesignated VP-130, then VPML- 2, and transitioned from the PV-2 Harpoon to the P2V Neptune patrol bomber.  In keeping with the redesignations, transition to a new aircraft, and reassignment of basic mission to antisubmarine warfare, a new squadron insignia was deemed appropriate. The new design, approved by CNO on , presented a cartoon King Neptune riding a rocket, against a starry sky and globe background.  In ’s hand was a trident with cannon barrels in place of tines. The background of the globe represented the long-range capability of the P2V Neptune.  The night sky denoted around-the-clock flying and King Neptune symbolized the sea and squadron’s aircraft.  The rocket was incorporated into the insignia to show the fast punch of ’s armament.  The trident with multiple gun barrels denoted the aircraft’s multiple firepower.  Colors: stars, white; sky, dark blue; water, light blue; continents, white; rocket, light gray;  King Neptune’s belt, blue; pants, red; beard, white; crown and trident, yellow; nose, red; body, pink; and guns, gray.  The cartoon King Neptune insignia was adopted by the squadron after its redesignation from VP-ML-2 to VP-2, and remained in use until .  At that time, CNO directed the squadron to come up with a new design “. . . in keeping with the dignity of the naval service, [as] cartoon portrayals are not authorized in Naval Aviation Insignia . . . ”   The resulting modification of the squadron insignia portrayed a less stylized King Neptune inside a blue disk with white border, Neptune white-haired and bearded, crowned yellow, and clothed in flowing red toga.  The right arm extended forward, the left hand grasping a yellow trident, was astride a black torpedo, colored white, above the top portion of a blue globe were longitude and latitude lines outlined in white.  In an arc at the top of the shield there were three white stars, two above the extended arm and one behind the figure.  The inscription PATROL SQUADRON TWO was on a blue scroll in white capital letters.  This design was approved by CNO on and remained in effect until the squadron’s disestablishment in 1969. 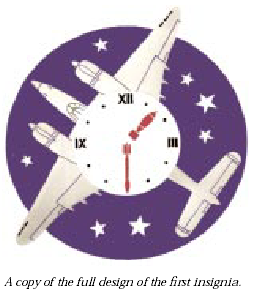 : VB-130 was established at   Organization and training of squadron personnel took place over the next two and a half months, followed on by shake-down training flying the PV-1 Ventura at

: Lieutenant Holmes and his crew sank the German submarine, U-615, commanded by Kaptainleutnant Ralph Kapitzky.  The submarine was caught on the surface in the southeast of and damaged badly enough by the bombs to prevent it from submerging.  Unable to escape, the German crew scuttled the vessel.  Forty-five of the Uboat’s crew of 49 were rescued by U.S. Navy vessels.

12–27 Aug 1943: The squadron moved to , where it remained until , when it was shifted again to Pici Field, .  Antisubmarine patrols and convoy coverage were the primary activities of the squadron during the next eight months.

: The squadron was reequipped with rocket launchers.  Ground attack training using rockets took place over the next 30 days.

: VPB-130 transferred to Ponam on .  Training continued along with operational ASW and antishipping patrols.

: VPB-130 began transferring its assets and personnel to Tacloban in the Philippine Islands, via , and Morotai. Squadron aircraft arrived on , and were placed under the tactical control of the 308th Bomb Wing of the Army 5th Air Force.  Through April 1945, the squadron undertook a variety of missions in conjunction with 13th Army Air Force operations.  Detachments operating from Morotai and conducted 300 to 600-mile sector searches.  The remainder of the squadron at Tacloban conducted 1,000-mile sector searches.  Numerous attacks were made on Japanese island installations, radar sites, airfields and small ships.

: VPB-130 transferred to , where all personnel boarded Kadashan Bay (CVE 76) on for return to the continental , where home leave was given to all hands.

: The “Truculent Turtle,” the squadron’s first P2V-1 Neptune land-based patrol bomber, flew from , to , a distance of 11,236 miles in 55 hours and 18 minutes.  The aircraft (bureau number 89082) was manned by Commanders Thomas D. Davies, Eugene P. Rankin, Walter S. Reid and Lieutenant Commander Roy H. Tabeling.  The flight was nonstop, without refueling, establishing a world record for nonstop flight.  When the aircraft was taken out of service years later, it was placed on display at NAS Norfolk, Va.  This historic aircraft is now on display at the National Museum of Naval Aviation,

March 1947: VP-ML-2 began receiving the rest of its compliment of P2V-1 Neptunes from Lockheed Aircraft Company,   These replacements for the PV-2 Harpoons marked the beginning of an intense period of training for all squadron personnel in antisubmarine warfare.

: VP-2 was assigned a tour in for cold-weather operational training.  The squadron provided resupply missions for the Oceanographic Survey being conducted in Alaskan waters.

: A detachment of VP-2 flying P2V-3Ws deployed to NAF Naha, , to patrol the and in the Korean theater of operations.  The detachment remained in the combat zone until December 1951, this was squadron’s first and last involvement in the Korean War.

: VP-2 became the first squadron to receive the new P2V-4 with the Wright Aero R-3350W compound-turbo engine.  Testing of the new engines was performed onsite at NAS Whidbey Island, Wash., without missing deployments. Detachments during this period were assigned to NAS Kodiak, , and , .  The Naha Detachment remained until , flying several combat missions in support of the UN action in .

: A from VP-2 was attacked by a Chinese MiG-15 while on patrol over the .  The MiG made three firing passes and the crew of the returned fire.  There was no apparent damage to either aircraft resulting from the encounter.

: VP-2 took first place among the Pacific Fleet squadrons in bombing, mining and rocket competition despite instrument flying conditions during 90 percent of the competition period.

: VP-2 relieved VP-6 for a six-month deployment at .  Squadron detachments were assigned to , ; Sangley Point, R.P.; , ; ; and and , RVN.  The last three months of the squadron’s WestPac tour was conducted at Tan Son Nhut Air Base, Saigon, RVN—the squadron’s first tour in a combat zone since World War II.

: VP-2 relieved VP-42 for a six-month WestPac deployment at .  Four months of the tour were spent at Tan Son Nhut Air Base, , RVN.

: VP-2 deployed to WestPac with half of the squadron at NS Sangley Point, R.P., and a six-aircraft detachment at Tan Son Nhut Air Base, , RVN.  The detachment at Ton Son Nhut moved a few weeks later to , RVN.

: The squadron conducted its last deployment, its fourth to the theater of operations, based at NS Sangley Point, R.P.


* The squadron remained part of FAW-4 but was assigned thetail code SB on .
** The squadron’s tail code was changed from SB to YC in 1957.  The effective date for this changewas most likely the beginning of FY 1958 ().